JAMAICAN sprinting superstar Asafa Powell was one of three local megastars who escorted new WBA featherweight champion Nicholas ‘Axeman’ Walters into the ring for his historic title fight against Colombian Daulis Prescott at the National Indoor Sports Centre on Saturday.

The track and field icon said Jamaica was on a quest for world domination in sports and he thought it important to support a fellow athlete in his bid to become a world champion in his field. 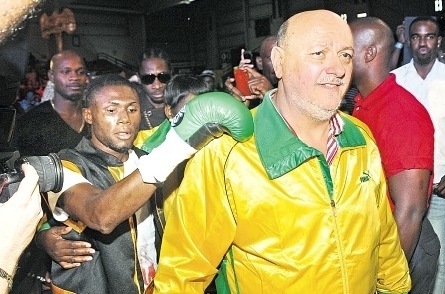 “I am one of Jamaica’s ambassadors for sports,” Powell told the Jamaica Observer, “so I thought it was fitting to escort him to the fight because it’s a Jamaican thing and we are trying to take over the whole sporting world.”

Powell made the trip into the ring with two other celebrities, entertainers Bounty Killer and Sizzla, and insisted the main thing was to have as many Jamaican superstars supporting him.

“He needed the support and that is an extra boost for any athlete — to know that you have the support of your country and fellow superstars,” Powell said.

However, he said although the expectation was extremely high, the ‘Axeman’ did not disappoint.

“We expected him to win as Jamaicans have high hopes and they always look for the best from their representatives. But we expected the win and he gave it to us and we are all very happy about it,” he added.

Powell now believes Walters will be even more respected and appreciated by the Jamaican public for his exploits.

“This (win) should make it a lot better for him… being at home and fighting in Jamaica so that we Jamaicans can see him fight, means the public will be a lot more interested in seeing him and so the support for him will only get better,” Powell said.