Asafa Powell may be the fastest man ever to compete in the Stawell Gift. via http://www.heraldsun.com.au 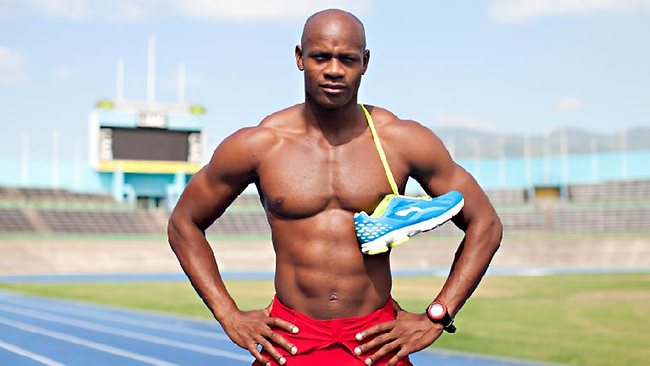 SOME of the best amateur and professional runners in history have run at Stawell’s Central Park.

Leading athletics commentator David Culbert was a regular at Stawell before taking over as promoter of Australia’s richest footrace.

Ask him about where this year’s drawcard, Jamaica’s Asafa Powell, sits and he says: “We have never had a guy this fast.”

Powell’s presence in Stawell takes the event to a new level.

Culbert says Powell has run more sub-10sec 100s “than any man in history”.

“He is also one of the best you have ever seen over 60m, I mean he has given Usain Bolt a flogging over 80m, but he’s just not the greatest finisher of all time.

“That means the last 40m of the (120m) Gift is a slight concern but that’s offset by the fact he’s a former world record holder and someone who’s been in so many major championship finals.”

Many champion international sprinters have lined-up in Stawell with only one — Madagascar’s Jean-Louis Ravelomanantsoa — able to claim victory.

The Mexico City Olympics 100m finalist was the first man to win from the scratch mark in 1975.

Some of the fastest men on the planet over the past 15 years have failed to progress further than the Gift semi-finals.

Olympic champion Linford Christie got through his heat but was forced to pull out because of injury in 1999, and US Olympic relay gold medallist Jon Drummond twice made it to the semi-finals.

Former world 100m champion Kim Collins is another who had two attempts at the Gift but couldn’t make it to the final six.

Last year, Powell’s teammate Michael Frater ran brilliantly but also failed to progress past the semi-finals. It was a positive report from Frater which led to Powell returning to Australia — he won the gold medal in the 100m at the 2006 Melbourne Commonwealth Games.

“He has wanted to come here before now but for a range of reasons, he couldn’t,” Culbert explained.

“An Olympic year was probably too much last year but Frater has gone back and told him, ‘You’ve got to come down here’, so here he is. The grass is no issue as we saw with Frater last year, they eat up the grass because they train on cow paddocks back home.

“But what’s exciting is that he’s a name that most sports fans recognise and he’s creating a heck of a buzz in western Victoria.

“I think people who haven’t been to Stawell for a while are thinking, ‘Well, I need to go this year and check it out’.

“It’s one of those situations where he elevates it. Frater and Collins were great but Powell takes it to another level.

“It’s not easy and the fact most runners this year have got a 2m lift (because of Powell’s inclusion) means this year’s event is going to be fast.

“Seeing someone as fast as Asafa Powell start in the red and mow them down is something we have never seen at Central Park.”