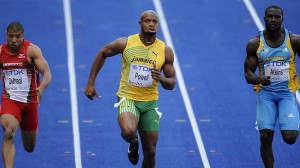 ONE of the fastest men in history, Asafa Powell, will race in this year’s Stawell Gift.

In a massive coup for Australia’s richest footrace, the former 100m world record holder from Jamaica will travel to country Victoria for the Easter event.

Powell last raced in Australia at the 2006 Commonwealth Games in Melbourne where he won the 100m.

His Jamaican teammate Michale Frater was unlucky to just miss the Gift final last year and spoke highly about the race which intrigued the three-time Olympic finalist. “I’ve been ready to come down a couple of times over the past few years but I’m happy to say that this year will be the year,” Powell said.

No athlete in history has run more sub-10 second 100m times than Powell, who has achieved the feat on an extraordinary 88 occasions – his best 9.72sec in Lausanne in 2008.

Powell held the 100m record for almost three years between 2005 and 2008 before Bolt ran 9.72sec in New York just before the Beijing Olympics, where he lowered it again.

The injury kept him out of the 4x100m relay in which Frater, Bolt, Blake and Nesta Carter won the gold medal in world record time.

Powell says he has fully recovered and will be in sub-10sec shape for the 120m footrace.

“Like most Jamaican sprinters, I’ve grown up running on grass and a lot of our training is done on grass so that’s no problem. The handicaps are a different story though,” Powell said.